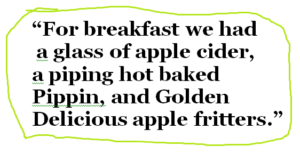 Especially to people like me who do marketing writing, editing and some creative writing.  I take pride in my punctuality (pun intended).

Punctuation is important, but it’s not something that keeps me up at night. That is until a few nights ago, when I woke up at 3:25 am and couldn’t stop thinking about a March 16, 2017, The New York Times article entitled, “For the Want of a Comma.”

Consider this sentence: “For breakfast we had a glass of apple cider, a piping hot baked Pippin apple, and Golden Delicious apple fritters.” The comma after “Pippin apple” is called the serial comma, of which I am a big fan.

Back to the Times’ story: The lack of a serial comma in a labor law phrase overturned a lawsuit in favor of three Maine truck drivers who sued a dairy for overtime pay. In the suit, the US Court of Appeals for the First Circuit sided with the truck drivers on the grounds that the phrase describing what activities were exempt from overtime rules wasn’t clear. The phrase was:   “….the canning, processing, preserving, freezing, drying, marketing, storing, packing for shipment or distribution” [of perishable foods.] Because there was no comma after “shipment,” the phrase could mean that “packing for shipment or distribution” was exempted, but not distribution itself.

Moral of the story: When in doubt, use the serial comma.

View all posts by patti →