You are here: Home › Blog › Pam Mason and Steve Rehn of Cole Canyon Farms: From Staging Plays to Staging Plants
By patti on January 17, 2017 in Farmer’s Market Vendor Profiles 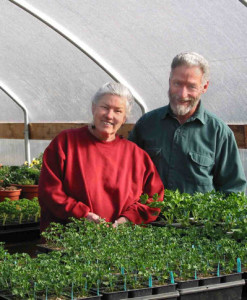 A theater stage is an unlikely place for two Aromas farmers to have met. Pamela Mason and Steve Rehn, owners of Cole Canyon Farm, became acquainted in the 1970s at the Julian Theater in San Francisco. Pamela designed and made costumes; Steve built sets and did some acting. Fast forward to 2011: the couple is celebrating their tenth year of business which propagates organic vegetable and herb seedlings. They sell their starts at ten farmers markets including the Aptos and Monterey Farmers Markets, as well as wholesale.

In addition to sharing a love of theater, both Pamela and Steve cherish childhood memories of helping with their parents’ gardens. Pamela was a tomboy who grew up on her grandparent’s small farm in Ohio where he grew corn, soy and wheat, and raised cattle under blue, sunny skies. Her dad was an itinerant farmer who had his own enormous vegetable garden. Each spring, the day he brought home the tomato starts for planting was one of the most exciting days of the year.  In contrast, Steve grew up in urban San Francisco. He helped his mother with a small flower garden in the backyard that flourished as she discovered what would thrive in the fog.

Pamela loved the farming life but had no plans to make it her livelihood. After moving on from the theatre, she held positions in arts administration at Teatro Campesino and the Mello Center, and taught at Golden Gate University. Meanwhile, Steve worked for a trade show exhibit company and was theater production manager at City College in San Francisco.

“Only after Steve and I bought the five acres in Aromas in 2000 and got tired of commuting did the idea of having a nursery business occur to us,” says Pamela. “They say you spend 30 years getting away from home, and 30 years to get back to it,” she chuckles. The couple bought some hens and goats and started growing tomato seedlings for sale at the Aptos Farmers Market. “When our seedlings business started taking off in 2001, we decided to quit our day jobs. We didn’t really have a plan for a business, we just thought we could make it work,” she says.

They dug their own well and Steve plumbed the entire property to irrigate their budding vegetable starts business. Steve found his new role as a farmer and nurseryman suited him well. “All of the skills I have gained over the years come into play,” he remarks. He rises well before dawn on market days to load and transport the starts to market. “I enjoy interacting with our customers. The market is my stage now,” he laughs. Pamela is passionate about growing plants and feels a spiritual connection to the soil. “We all know how to garden; it’s in our genes. You can grow food no matter where you live. Most people don’t realize how much food can be grown around here ten months of the year!” she says.

As they reflect on the tenth anniversary of Cole Canyon Farms, Pamela and Steve are gratified that their business has steadily grown. They are ready to dig in for the next ten  – call it Act Two.

View all posts by patti →

The Astones: a Life of Discovery through Protea Plants
How the Lack of a Comma Can Cost Ya